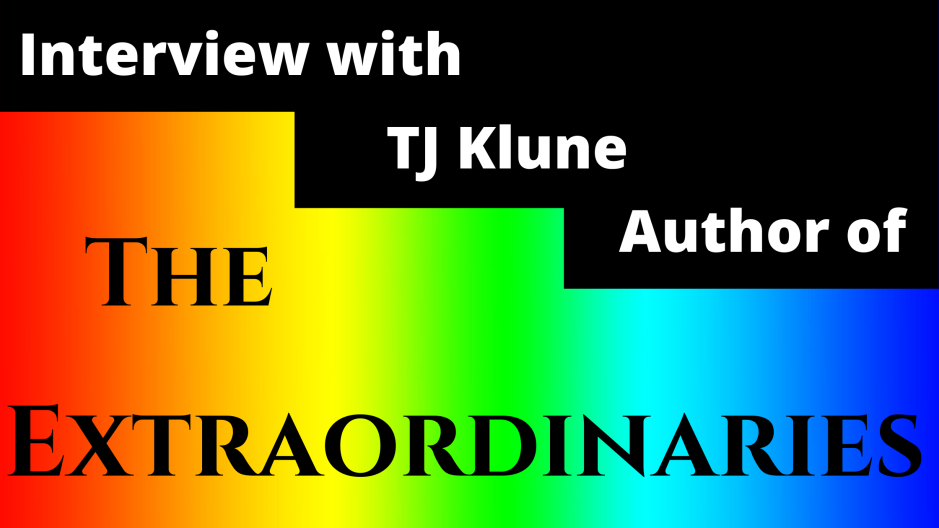 My second book interview has finally arrived! I’m really excited for this one. I read “The Extraordinaries” a few months ago and loved it. This is, quite possibly, the funniest book I’ve ever read. I was literally laughing every single page.

Unfortunately I did not have time to write a review of “The Extraordinaries”. Fortunately, you can read my (very short) goodreads review here and you can find the synopsis on goodreads here.

Anyways, why am I wasting your time by talking? Here’s the interview with TJ Klune about his YA debut “The Extraordinaries”!

Q: When did you first realize you wanted to become an author?
A: When I was a kid! I carried around this notebook, filling it with stories I’d think up off the top of my head. They obviously weren’t very good (I started when I was six or seven), but even back then, I was already thinking about writing, and what I wanted to do with it. When I was in seventh grade, I had two amazing teachers who really pushed me to continue writing, and I’ve never forgotten their faith in me.

Q: The Extraordinaries is your YA debut. What made you decide to write a YA book and this book in particular?
A: I’d always been thinking about wanting to write a superhero book, given that I’m a huge nerd when it comes to comic books. It was nebulous, this thought, as story ideas sometimes are, but then I was talking with a friend and complaining about proper neurodiversity representation in fiction. I have ADHD, and it’s still so hard to find characters written by authors who either a) are neurodiverse themselves or b) actually do the research into what it means to have ADHD.
It kind of coalesced from there, and I knew I wanted to write about a sixteen year old kid with ADHD and his head stuck in the clouds, given his obsession with the superheroes in his city. This book was to give people like my–the neurodiverse–someone to root for, someone who thinks and talks and acts like they do, so they could see themselves in fiction. When I was sixteen, I didn’t have that kind of rep, or good and honest queer representation. While the latter has gotten much better as we near the end of 2020, I think we still have a ways to go before we’re there.

Q: Are any of the characters from The Extraordinaries based off of anyone?
A: Not really! I think it’s fair to say that authors pluck bits and pieces from authors (and themselves) and put that into the characters and/or stories that they right, and I certainly can say I do the same. But specific people with specific traits that’s a one-to-one representation of them? I try to avoid that. It feels…I don’t know. Weirdly invasive, but that’s just me.

Q: What did you learn while writing The Extraordinaries? How did you grow as an author and a person while writing it?
A: The best thing l learned was from all the research I had to do on fandom and fan fiction. A big part of The Extraordinaries is that Nick Bell, the main character, is the most popular writer in the Extraordinaries fandom. He writes barely-disguised self-insert fanfiction about the superhero he has a crush on.
Fan fiction gets such an undeserved bad rap. There’s a negative connotation behind it, suggesting that everything people write in fandoms is juvenile. That couldn’t be further from the truth. Is there bad fanfiction? Yes. But then there are bad books that are published by major publishers.
The biggest thing I learned is how fandom is a safe place for marginalized groups, many of whom are queer people who don’t get to see themselves in the canon books/movies/tv/whatever their writing about. So they write the stories they want to see. In addition to giving them the rep they deserve, fanfiction can also be a place where writers can figure out how to hone their creative voice. In researching the Extraordinaries, I read some of the most beautiful writing I’ve ever had the pleasure of reading, and it was in fanfiction.

Q: What was something or some things that helped you get through writing this book–a food, pet, advice, something else?
A: My dog helps quite a bit. When I’m stuck and facing writer’s block, or I’m not sure about what needs to happen next in a story, I’ll take Hendrix on a long walk through our neighborhood or at the park, and it allows me to have time away from a word document, to be able to clear my head and regain my focus.

Q: What can we expect from book two, Flash Fire? (No spoilers please)
A: Flash Fire is going to continue threads that started in the Extraordinaries, and will open up the world a bit. The Extraordinaries was always meant to feel a bit insular, with Nick’s extreme focus on trying to become a superhero. With the sequel, we see other Extraordinaries, and Nick and Seth and Jazz and Gibby will have to contend with what that means for them, their families, and Nova City. It’s bigger, badder, sexier (ish–Nick is still sort of a prude), and I’m so excited for people to see what comes next.

Q: What is some advice you have for aspiring authors?
A: One thing that bugs the crap out of me is when I here authors telling others that a “real” author writes every day. This is terrible advice. While some can write everyday, I’m not one of them. It’s important to learn your limits, and to accept the fact that some days, the words just won’t come. Though far and few between, those days can be rough, especially if you force yourself to try and write through it. You’ll only end up frustrating yourself, and could potentially lose sight of why you’re telling the story you are. If you do hit one of those walls, for the love of all that’s holy, take a damn break! It could be for an hour or a day or a week or a month, but don’t force it because the story won’t be like you want it to. If I ever hit those blocks and it looks like it’ll last a little longer than a day, I try and work on something else, to move my focus. Nine times out of ten, when I come back to the story that was giving me issues, I’ll see right away where I went wrong, and how to fix it.

Alright that’s the interview! I hope you enjoyed!

3 thoughts on “Interview with TJ Klune, author of The Extraordinaries”