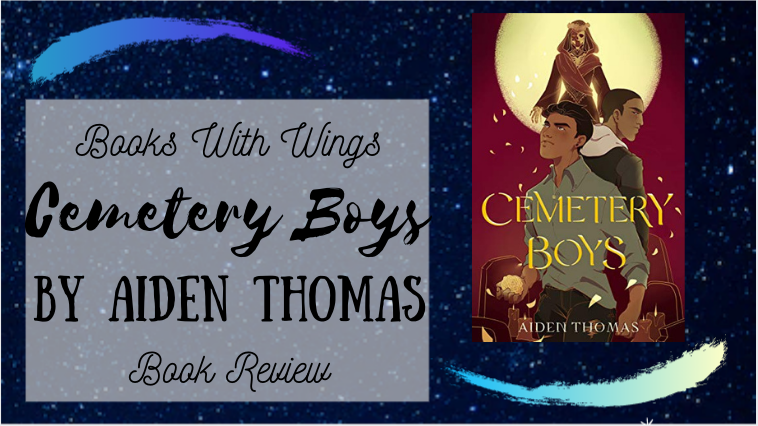 So…you guys know how I did on my last review (hint: not well, since it was a month since I read the book).
…
Okay fine it’s been exactly a month (as of the day this post is published) since I read Cemetery Boys, as well.
Yeah, I really need to write my reviews sooner.
But I HOPE that I can still write this review pretty well because I LOVED reading this book.

When Yadriel’s traditional Latinx family puts off the ceremony that would cement him as a brujo – indefinitely – due to the fact that he’s trans, Yadriel becomes determined to prove to them that he is a true brujo. With the help of his cousin Maritza, he performs the ritual himself, before deciding to find the ghost of his murdered cousin and set it free.

And Yadriel does summon a ghost – but not the ghost he was looking for. Instead, he’s found the ghost of Julian Diaz, the school’s resident bad boy and Julian most certainly does not want to go into death quietly. The cause of his death is uncertain and Julian needs to know what happened. Yadriel agrees to help him with the mystery as long as Julian will let Yadriel release him without a complaint afterwards. But the longer that Yadriel spends around Julian, the more uncertain he is that he really wants him to go.

All summaries are my own unless otherwise stated. Parts of the summary may be borrowed from goodreads

Let me tell you a little story.
I first heard about Cemetery Boys in…April? May? Anyways, I was just starting to get into the book community. And WOW it sounded SO GOOD. But it didn’t come out until September, which was quite disappointing to me (I was new, what can I say, I wasn’t used to waiting long times for releases!).
Then, September rolled around and it got released and I was SUPER excited. But September was this sort of awkward time because I wanted to own it and so I could ask for it for Christmas but Christmas was sooooooo far away. And I really wanted to read it right. then.
I decided to wait for Christmas. And in all this time, I was reading reviews, hearing people rave about this book, and that just built up all the hype in my mind. It was practically my favorite book before I’d even read it! I was recommending it to people, I even voted for it on the goodreads choice awards! I loved it before I even had my hands on it.
Aaaaaaaaaand…..

It totally lived up to the hype!

Yadriel was a great protagonist. Honestly, I think that he acted a lot like how an actual teen would act. He’s just a kid trying to make his family see who he really is. I’ve seen a review or two complaining that he can be a little whiny at times but honestly I feel like that’s pretty justified given his family situation.

Julian is pitched in the summary as ‘the school’s resident bad boy’. And I honestly think this is interesting and sort of gives insight as to how society labels us. The only bad things that Julian really did was skip school. He hung out places like under bridges with his group of friends because none of them had very good homes to go back to and just those two things were enough to make basically everyone have opinions about him. These kids at school didn’t even know him but were telling stories about how his brother took over the family drug trade and was selling it out of his mechanic shop. Don’t listen to everything you hear, kids. (tries to pretend she’s like 20 years older than everyone reading this even though she’s not).
But really, Julian is a super sweet person. He’s so loyal to his friends and worries about them so much even when he’s literally dead.

And last but certainly not least, there’s Maritza. I loved Maritza because she’s so close to Yadriel. I really enjoy reading strong family relationships and though Yadriel’s relationship with the rest of his family is not so great, Maritza’s always by his side, always supporting him.

Honestly, when I picked this up, I was expecting more plot than this. I mean really from the summary I wasn’t sure what kind of book to expect, aside from ghosts (spirit! Ghost is a derogatory term). But whatever it was, it was not this. I maybe expected some adventure, it’s talking about ‘agreeing to help Julian’ (goodreads summary) so for some reason that always makes me think of two people setting out on a quest to do blah and blah and blah
But, no matter what the plot actually was like, I enjoyed this a lot! It was a lot more…relaxed than I thought? I’m not entirely sure what that means since, like, there was a time limit and death and blood etc. but yep, that’s what I’m thinking about this right now. The mind of Phoenix works in mysterious ways, my friends.

And of course, we cannot discuss this book without discussing the awesome way that Aiden Thomas wove trans and LGBTQIAP+ issues into the plot. The way that these things were commented on in the book never slowed the plot down and yet it was still such an important part of the book. This was really awesome to see because I just don’t see many books that manage to do this so successfully.

Queer Folk are like wolves. We travel in packs

Quote from Julian. I just had to add this in here.

Find some other awesome Cemetery Boys book reviews at Never Not Reading and The Bookish Mutant! Also, The Quiet Pond did an interview with the author, Aiden Thomas!

Have you read Cemetery Boys? What do you think of this post? I’d love to hear your opinion on my opinion–just as long as it’s respectful!
As always, thank you so much for checking out this post–it means the world. Stay safe and keep on reading!