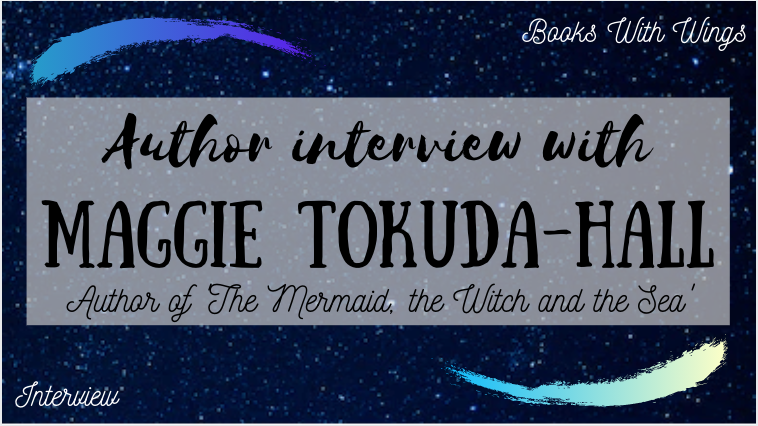 Hey everyone! I know I usually post on Sundays (and the occasional wednesday/thursday when it’s the end of the month) but you’ll have to forgive me for being a bit late as I was celebrating Easter with my family yesterday (and I’m terrified of scheduling posts because I feel like I’m going to mess everything up).
I am so excited today to be hosting an author interview with Maggie Tokuda Hall, the author of ‘The Mermaid the Witch and the Sea.’
I read ‘The Mermaid, the Witch and the Sea’ in January and thought it was a really interesting book! MWS is an adventure fantasy and while it does follow a lot of the same paths as an adventure fantasy usually does, there are a lot of factors that make it a super interesting read! It was especially interesting how it was sort of split into three different sections, each with a sub plot in them–the mermaid, the witch, and the sea.
Now, let’s get right into this interview! I hope that you enjoy!

I always loved telling stories, but when I was a teen and a college student, I thought of myself as a visual arts person. It was in pursuit of my BA in Studio Art that I realized what I really loved was narrative, and that my greater ability to achieve the stories I wanted to communicate was through writing, and often with the interplay of text and image.

2. How did you come up with the idea for The Mermaid, the Witch and the Sea?

This book is written for one person in particular, a young woman named Clare. I met her when she was 9 years old and I worked in a bookstore. She was this shockingly bright, voracious reader, and when she was 10 or 11 her parents hired me to be her creative writing tutor. In the time I spent mentoring her it became clear that– at the time– there weren’t many stories that she liked best, with magic and murder and rules and kissing, that centered queer kids. So I sat down with the idea that I would write her that book. She’s 22 now, so I missed being able to hand it to teenaged Clare, but I got to hand it to her as an adult, and it felt like my own coming of age moment. It’s very emotional for me, realizing that in trying to create a coming of age story for her, by the strength of her character and her imagination and her joyful queerness, she created a coming of age moment for me, too.

3. What inspired you to write this book, especially when you were stuck?

I started this book when Clare was 13. It came out when she was 21. I got stuck a lot. I spent more time stuck than writing. My biggest problem was that I kept rewriting the beginning thinking, erroneously, that if I could just write the perfect beginning then it would lead me to a perfect middle and end. What I was learning the hard way was that, no matter how good a beginning is, it’s nothing until it has an ending to answer it. The thing that ended up getting me to finish a first draft (most of which is gone now, it’s worth noting) was NaNoWriMo 2016.

4. Is there anything you hoped to accomplish by sharing this book with the world?

I just wanted Clare to like the book. That was the number one, only and most important goal. She liked it, thank god, but everything that has come after that has been just bonuses for me. The most meaningful emails I get are from kids who have come out as gender fluid after reading it. That they found permission or solidarity or reflection on their own identity that moved them in a step to being their truer selves– I can’t imagine anything else as meaningful as that to me.

Oh gosh. I learned so much, and I do really believe that writing your way through it is the only way to learn to be a writer. It’s reps, it’s just like sports that way. You can practice and practice and practice (and you have to practice and practice and practice and practice) but you also need to play a game, to finish the thing. You need more seemingly infinitely more practice than you do game time, but that game time is what really gives you confidence. At least, that was what I found for myself. The more I practice the more I trust my own decisions, the less time I spend fiddling about with things that can be fixed in the next draft, or projects that aren’t right yet. I only let myself write forward now, and that’s served me so so well. I’ve also learned to get comfortable (even delighted) by deleting things. I don’t save any of my own writing anymore, no projects I didn’t finish, no character sketches. I force myself to write from scratch every time because I’ve learned now that every time I write I get better. So why not work with the best I have to offer?

6. MWS is your YA debut. What made you decide to write a YA book instead of sticking with what you usually write?

I usually write YA. I have a few picture books– one out and a couple on the way, and some short stories and essays for adults. But YA is my favorite genre to write. I have a YA graphic novel out in October 2021 called Squad (about teenaged girls who turn into werewolves at the full moon and eat sex pests) illustrated by Lisa Sterle. There will be a sequel to MWS, and another YA graphic novel in the time after that. And I hope much more YA after those, too.

7. What is some advice you have for aspiring authors?

Free advice is worth every penny. But that doesn’t necessarily mean advice you paid for will work for you, either. You never know who’s advice will be the thought technology that cracks open accomplishment for you, and I won’t pretend to offer it. I can tell you what worked best for me, but I’ll tell you that when I say these things on panels much more experienced and accomplished authors break into a cold and horrified sweat when I say I don’t save anything, or that I delete everything. Or that I believe that often, that slog I feel with a story, is permission to abandon it.

Well, that’s it for the post, everyone! I really hope that you enjoyed it and it was super fun to conduct this interview! I thought it was so meaningful to hear of Maggie Tokuda-Hall’s journey through writing this book to get it out to Clare and I’m so happy that it’s a book now!

What did you think of this interview? Have you read The Mermaid, The Witch and the Sea? Do you want to? Please, talk to me in the comments, I’d love to hear what you think!
Thank you so much for stopping by to read this post and as always, stay safe and keep reading!

20 thoughts on “Author Interview with Maggie Tokuda Hall, Author of ‘The Mermaid, the Witch and the Sea’”